Stretching is, of course, a contentious issue in sports. The bulk of the available science strongly suggests that static stretching before a workout not only does not prevent overuse injuries but also may actually hinder athletic performance...Past studies have found that athletes’ vertical jump is lower after a bout of static stretching than with no stretching at all. They can’t generate as much power. 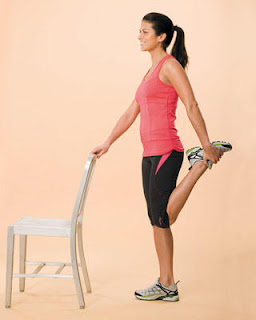 The statement above is a quote from a September New York Times article, "Phys Ed: Does Stretching Before Running Prevent Injuries?"  I could answer that question, but I'll let the article talk for me:

...other studies have found, like the new track and field association report, that static stretching seems to have little benefit in terms of injury prevention, particularly against the overuse injuries common in running.

The new track and field report it mentions is a study from a few months ago that found stretching to have zero effect preventing injury.  The study examined almost 3,000 runners over a three month span.  The subjects, all who ran at least 10 miles per week, were split into two groups: the stretching group spent about five minutes before each run performing three reps of stretches for the quads, hamstrings, and calves.  The control group performed no stretches beforehand.  Injuries were experienced by 16% of each group.

Not only does stretching have no effect on injury prevention, it does not reduce potential delayed-onset muscle soreness, it may increase the risk of long term injury, and it decreases strength and power output.  If this sounds new to you, I strongly recommend checking out my original stretching post from May 19, 2009, titled "Closing Bridges."

Stretching, according to research, is a waste of time.  Unless it is something that brings you happiness, then I recommend dropping it from your routine and using your time otherwise.
Posted by Dr. Sean Preuss at 8:17 PM