Somatypes: Why Some People Are Always Lean 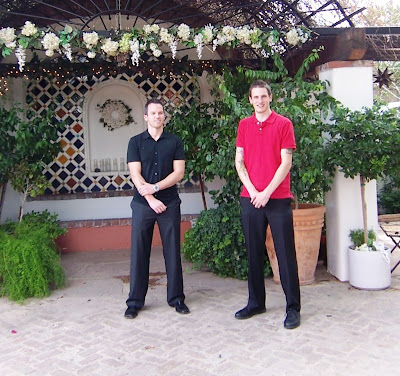 Standing next to me in the picture above is my best friend Andrew (at his wedding rehearsal in 2009).  Physically, Andrew is probably similar to a lot of people you know.  He is and always has been a very lean individual.  No matter what he eats, Andrew never becomes fat or even just a little "pudgy."  Throughout his life, Andrew has endured a barrage of comments along the lines of, "you're too skinny," and "you should eat more!"  However, it's not Andrew's fault that he has less body fat than most of us, and telling him to change that is not much different than telling the governor of New York that he should make the state warmer. Andrew was born to be thin.  He is an ectomorph.

In a previous blog post, I mentioned that genetics have a large role in our body composition through a number of factors.  One of these factors is a person's somatype.  Somatypes are general congenital human characteristics that describe the range of muscle and fat a person can have.  There are three types:
People are not always completely one type.  Male models with eye-catching six packs and large chests probably have ectomorphic in their body fat but mesomorphic in their muscle capacity.  Large football players, such as offensive lineman, have above average fat mass and muscle mass, giving them endomorphic and mesomorphic tendencies.

When it comes to the conversation on somatypes, these are concluding points you should keep in mind: