Drew Manning and The Biggest Loser: Tales of Weight Cycling 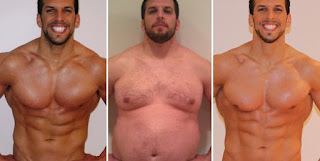 You may have seen personal trainer Drew Manning's story recently on the internet or Good Morning America: he INTENTIONALLY gained and lost more than 70 lbs. (from 193 to 265 to 193) in an effort to gain a better understanding for what his obese clients are facing.  The pictures above, from left to right, are of Drew prior to the weight gain, at the peak of the weight gain, and in the present.  While I applaud Drew's effort and desire to relate to his clients (and I'm sure his bank account will benefit with dozens of new clients), I'm concerned for his long term health.  Drew's weight gain and loss - referred to as "yo-yo dieting" in general or "weight cycling" in research - poses potential long term health and weight maintenance problems.  This is true for anyone who has weight cycled, even if the loses and gains are only 10-20 lbs.  I'll summarize my concerns below in two reasons.

How does this apply to Drew Manning?  Adaptive thermogenesis does not disappear when returning to the original weight - even though Drew is back at 193 lbs., he's not better than ever.  His metabolism is likely slower it was when previously at 193 lbs.  This has been demonstrated in a few studies [2, 3].

What's more discouraging is the sustainability of this effect (adaptive thermogenesis): it doesn't wear off. Metabolism does NOT eventually adjust to body size. One study included two groups of people at the same basic weight [4]. One group lost at least 10% of their body weight to reach that weight and had maintained the loss for over a year, whereas the other group was at that weight with no prior weight loss. The daily energy expenditure (calories "burned") of the weight loss group was significantly less. Simply put, people like Drew who have weight fluctuations that end in some kind of weight loss will have to be disciplined with their diets forever to maintain the loss.  Drew now faces a tougher challenge in preventing future weight gain.

We covered weight, but what about health? The repeated overshoot theory describes another negative impact of weight cycling: an increased risk for heart disease.  Even though Drew has attained his regular weight again, the fluctuations in cardiovascular measures (i.e. blood pressure, blood glucose) during his weight cycling leave him with an increased risk of heart disease [5].  Here are some examples:


How Drew's Story and Weight Cycling Apply to You

As you see, weight cycling presents a bleak picture.  Do I think Drew Manning will turn out well in the long term?  I have no idea.  The majority of the research presented looks at people who have fluctuated up and down (at least 10 lbs.) several times.  If this is Drew's first major weight cycle, he is probably in a better state than people who perpetually yo-yo diet (go through continuous periods of weight loss and gain due to frequent and significant diet changes).

More importantly, for those of you who do partake in yo-yo diets, this post is speaking to you.  Several bouts of extreme diets (i.e. hCG, cabbage soup, etc.) that lead to large but unsustainable weight loss could lead to long-term weight gain.  In addition, these fluctuations increase risk for heart disease.

My advice is this: don't attempt to lose weight UNLESS you are making changes that you can sustain.  As previously discussed, it is your lifestyle and not your weight that dictates health.  If better health is what you desire, improve your diet and exercise habits, and look at weight loss as an added bonus (if it occurs). If weight loss is your primary concern, don't starve yourself.  Make changes to your diet that you feel you could do for the rest of your life.  Ill-fated diets are only going to put you further from your goal in the long term by destroying your metabolism and health.
Posted by Dr. Sean Preuss at 6:15 PM

Thank you (very much) for this. After an 80 lb. weight loss last year, I had been struggling with maintaining my healthy habits and have gained a few pounds. I am 48 years old and an 8 year renal cell cancer survivor. I am at risk for a reoccurrence due to family genetics. (my two oldest brothers passed away from this cancer) I never knew that weight cycling is an added risk. My oncologist had never mentioned it. So glad I read your blog tonight. Just the motivation I needed.

Hi, Sean. The dangers of yo-yo dieting were a popular topic a couple decades ago. Then you didn't hear much about it, for reasons unclear to me.

A 2009 article in Archives of Internal Medicine suggests that weight cycling may not be as dangerous as we thought, at least in women. I blogged about that research here:http://advancedmediterranean.com/2012/05/23/yo-yo-dieting-in-women-has-no-effect-on-death-rates/

Then a couple years ago, folks were writing about all the fat soluble toxins released when we lose fat weight. The toxins were less dangerous when tied up in our adipose tissue. Or so they say. I never delved into it.

Cindy - Thanks for reading. 80 lbs - that's incredible. As far as weight cycling and renal cell cancer goes, keep in mind that it is an association between the two. The cause for increased risk is likely something else, like inconsistent dietary or exercise habits. Nonetheless, yes, you should take this as motivation to be consistent with the habits that helped you lose the weight. If there's anything else I can do to help you, please feel free to email me: spreuss40 (at) yahoo (dot) com.

Steve - Thanks for the link. Good post. You reasoning for adipose tissue decreasing risk bu being a storage unit for toxins makes sense. Thigh and hip fat are associated with lower rates of heart disease in men, and I believe that could be due to the same reason.