There are some fields where professionals aren't needed to get involved. While we need a pilot to fly a plane, we don't need a financial adviser to invest money or a doctor to buy (many) medications. While the freedom allows us to learn with first-hand experience, it can also lead to issues, such as poor returns on investments or not curing acute illnesses quickly.


Exercise is another field where a professional isn't needed. While training oneself has advantages (autonomy, saving money), it also has disadvantages. Not using an exercise physiologist or personal trainer adds to the risk of using fitness practices that are ineffective or even dangerous. One of the most common examples is how people train their abs.

Most "ab exercises" provide little to no benefit for the abs. They actually train other muscles which have no connection to how we look. Also, the perceived "ab exercises" are extremely strenuous for the lower back.

The main role of the rectus abdominis, or "abs," is to curl the back into a 'C' shape (lumbar flexion). The most common example of this is a crunch. The pseudo ab exercises do not cause the back to curl at all. These movements actually focus on moving at the hip (hip flexion). The muscles that perform hip flexion are referred to in general as the "hip flexors" (iliopsoas and illiacus).

The photos below show you views from the front of the body. In the first image, blue indicates the abs while the red indicates the hip flexors. Notice that the abs are on the top surface while the hip flexor muscles are deeper, being close to the spine and under layers of muscle. In other words, if you train your hip flexors, you won't change the way your midsection looks. 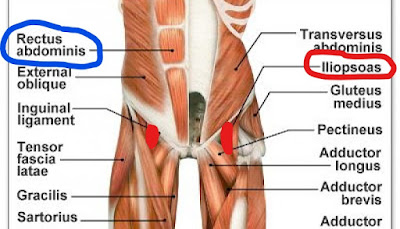 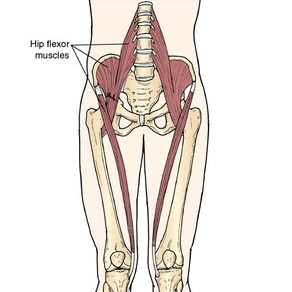 Crunches train the abs and can improve the appearance of the midsection. If your spine curls into a 'C' shape during an exercise, it's likely an ab exercise. Below are examples of ab exercises. Note the green line, which is intended to mimic the shape of the spine in each position.

The Dangers of "Ab Exercises"

Pseudo ab exercises that actually focus on the hip flexors are leg lifts, knee lifts, and sit-ups. Also, ab machines are mostly used incorrectly, with people leaning forward, which emphasizes the hip flexors. During all of these movements, the spine is mostly or completely straight. Notice the straightness of the green line in the pictures below.

What makes this common exercise error a large concern is the stress hip flexion exercises put on the lower back. Research from the lab of Dr. Stuart McGill, largely considered the leading researcher in spine biomechanics, indicates the lower part of the lumbar spine (L4/L5) experiences a large amount of force during sit-ups and leg lifts (1). Injuries, in general, occur when bones, muscles, and other tissues are given more force than they can support.

The graph below shows the results of a study looking at how much force (measured in Newtons) each exercise places on the lower lumbar spine when the exercise reaches the peak of the movement. The higher the bar goes, the greater the force placed on the spine.


The pseudo ab exercises, along with twisting crunches, place large loads of force on the lower lumbar spine.

The truth is all non-isometric ab exercises place at least a moderate amount of stress on the lower back (1). The smartest move for your lower back is to only perform isometric movements, such as the plank and side plank. However, isometric exercises do NOT lead to muscle growth. I care about how my abs look and I imagine you do, too. Therefore, here are my thoughts on how to minimize your risk of a back injury while maximizing what you can do to help improve how your abs look:

I am so grateful I get to learn from Professor's like you such good information that needs to be shared!

Thank you for reading. Please do share...so we can keep people away from leg lifts and sit-ups!

Thank you for sharing. I love doing extra abs after my workouts and now I will be making some changes. This was an eye opener.

So great to know! Thank you!