I went to the BODIES...The Exhibition yesterday...and it was amazing!  In case you are unfamiliar with BODIES, it is a display of well-preserved anatomy from deceased Chinese people. 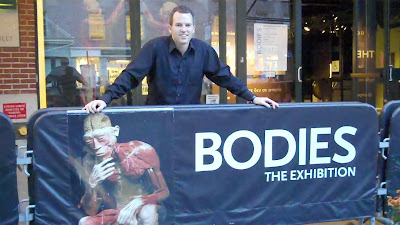 Some exhibits show one organ or organ system, while others involve several organ systems, allowing the viewer to gain a better understanding of their interconnected relationships. The nine display rooms include isolated looks into the muscular, skeletal, digestive, cardiovascular, respiratory, nervous, and endocrine systems.

What I found most fascinating were a few exhibits that show organs that were overcome by pathology or adipose (fat) tissue.  If you are looking for motivation to start healthier habits (e.g. stop smoking) or lose some weight, this segment will get your attention.  It's hard to believe that being obese is acceptable after observing the noticeably differences between the obese and thin bodies.  Also, if you strength train, there is an exhibit that will show what your internal organs may look like.

For those of you who have gone to cadaver labs, BODIES is a completely different experience.  BODIES does not allow the patrons to touch the exhibits.  Also, due to a process called polymer preservation (parts of the organs are removed and replaced/hardened with plastic), the organs and tissues of the body retain their real appearance without any foul odor whatsoever. 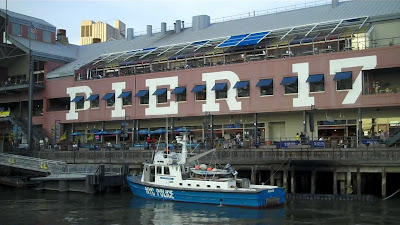 I think this is an experience for everyone, no matter what your current understanding of the body is (note: if you don't know much about the anatomy, an audio tour device is available that will elaborate on all of the displays).  The BODIES Exhibit in New York City is found at 11 Fulton Street at Pier 17 of the South Street Seaport.  There are also BODIES locations in Albuquerque, Atlanta, Cleveland, Las Vegas, Madison, Omaha, St. Louis, Tucson, Tulsa, and Winnipeg.
Posted by Dr. Sean Preuss at 8:10 AM