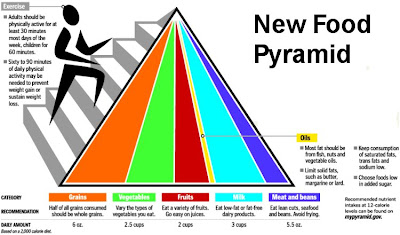 The above picture is the USDA's most recent food pyramid.  In case you can't read the writing, the orange represents how much of your diet grains should be.  The green represents vegetables, red for fruits, and teal for milk.  Conscious of how fat can destroy your heart health, the USDA included very small sections for oils (yellow) and meats (which is blue and also includes legumes).  The following are quotes from the text on that picture:
Four comments saying basically the same thing in one picture.  The point is clear: avoid saturated fat.

The Lipid Hypothesis
To finish up with the USDA, here are two quotes from a page on their website:
What you just read is called the lipid hypothesis: if you eat saturated fat and dietary cholesterol, your blood cholesterol will increase, become deposited in your arteries, and your chances of having a heart attack increase.
Should you be worried about your blood cholesterol level?  Is it high?  Should you avoid eating fat and cholesterol?  I'm going to dissect the lipid hypothesis, whether it's true or not, and the science behind it.  The name is a good place to start.

Lipid means fat.  It's called the lipid hypothesis and not the cholesterol hypothesis because it's not actually about cholesterol.  The so-called "bad cholesterol", low density lipoproteins (LDLs), are actually mostly fat with a little protein.  They carry cholesterol from the liver to other tissues of the body, but LDLs themselves are not composed of cholesterol whatsoever.  It's the same thing with high density lipoproteins (HDLs), which are also composed of protein and fat (HDLs are taxis for cholesterol from various tissues to the liver).  It's called a hypothesis because it's never been proven and validated by quality research (if it were absolutely proven to be true and verified by other professionals, I believe it would be a scientific fact).  According to Anatomy and Physiology, Fifth Edition, by Saladin, a hypothesis is "an educated speculation or possible answer to a question."  The question: what causes heart disease?  The speculation/possible answer: eating fat and/or dietary cholesterol might cause it.  Lets see what the original research said.
Lipid Hypothesis Origin and Founding Research
The lipid hypothesis was originally suggested by a cardiologist named Ancel Keys.  In 1954, Keys and other well-known individuals in the medical field met at a World Health Organization meeting.  Keys then proposed this hypothesis, although the original studies on this matter weren't even finished (and some weren't even started).  What were these studies that eventually served as the backing for Keys hypothesis to spread? 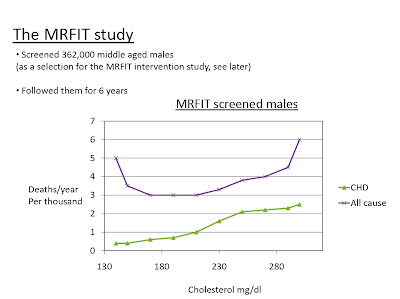 What does this all mean?


The results are all conflicting.  If anything, they show that a cholesterol level over 200 mg/dL might be healthy or that total cholesterol has no effect on health.  However, these studies (mostly just epidemiological studies that can't prove causation due to an excess of uncontrolled variables) and the individuals who twisted the data for the results they wanted are the basis for why the USDA and other organizations tell you not to eat saturated fat, cholesterol, and red meat.  The media increases the strength of these lies by reporting the occasional study that finds even a slight association (like Meat Intake and Mortality in 2009), however it skips over other studies of similar or better quality that doesn't support its biases (such as a recent meta analysis of 23 studies that found meat to have no association to heart disease).
Here are the truths when it comes to heart disease, cholesterol, and fat:
For more information, check out the following articles and sites:
For a more thorough breakdown of the discussed issues, try the following books:

Thank you Fred. Hopefully the message about cholesterol will get out through your site, mine, and all of the others who are informed.