Caused by a Diabetes Medication...Deficiency? 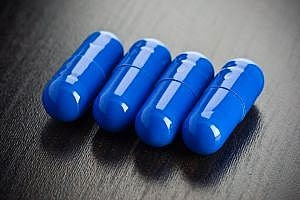 A few months ago, I spoke with a diabetic and obese man, just over 50 years old.  He voiced his displeasure with both the health and weight problems.  He saw a news piece about resveratrol, a substance found in grapes that is believed to aid weight loss and lower blood sugar.  He was interested in taking resveratrol pills although not confident and wanted my opinion. I recommended starting a low carb diet, a method that has been shown to reduce blood sugar and body fat through several studies (like here, for example).  I also recommended strength training, even just once a week for 20 minutes, as it would improve insulin sensitivity and physical appearance.  We finished up by getting the information of a low carb doctor in his area who could supervise the diet and alter medications as needed.

The result: he went with resveratrol and no diet or strength training.  Recently, he stopped taking the pills due to lack of any progress.  Unfortunately, the man is a microcosm for the mindset of most people.  Most people are generally unwilling to try something that is new, not in their comfort zones, and something that may take more effort, especially when there is a pill that promises to hide the symptoms without any changes to lifestyle.  Symptoms and the cause of the disease, however, are not the same.  Treating symptoms is just a simple way to mask the condition and put off the problem.  It's no different than avoiding the room in your house that needs to be painted, instead of just painting the room and eliminating that stress altogether.  In addition, as someone once told me:


(Feel free to plug in your own disease and related medication in the previous phrases).

Other examples of masking symptoms are going for massages and taking up meditation for stress management when a change to your commute or work hours would eliminate the stress altogether.  Now, sometimes these sources are temporary and necessary (i.e. moving, changing jobs), but when it comes to health, why not just attack the source?


The following video was recently posted on Tom Naughton's blog.  It's a hilarious satire on the magic pill-over-diet-and-exercise world that we live in.  Enjoy:

Sometimes I wonder if a low carb diet is also a case of treating the symptoms since it's more about avoiding high blood sugar than improving the body's ability to handle high blood sugar. The fact that strength training undoubtadly does the latter by improving insulin sensitivity makes me apprechiate it greatly.

I completely agree with your point. Treating the cause if possible will always be superior to just masking the symptoms.

Hillarious video! Thanks for my first morning laugh.

The individual symptoms/diseases of metabolic syndrome are all related to elevated insulin levels. Reducing carbohydrate intake is an effective way to reduce insulin levels, and therefore, it's an effective approach to preventing long term disease. Now, my understanding of type II diabetes, from talking to diabetics who brought their blood sugar levels back to "normal" levels through low carb dieting, is that they still remain sensitive to carbohydrate intake, they just learn to live without carbs in their regular diets...which kind of speaks to your point. Is there a way to create improved tolerance of high blood sugar? I have no idea (although I wouldn't be the first person to know). Have you heard of a way?

However, I would say that treating high blood sugar with a low carb diet is different than the person who works a stressful job and goes to yoga after work to destress. The person's stress level goes up and down every day, whereas the diabetic who eats a low carb diet can live perpetually with healthy fasting glucose levels.

Sean, when I wrote "handle high blood sugar" I didn't mean tolerate it, but rather regulate it as it happens in healthy individuals. As far as I know, the way to improve the regulation is increasing insulin sensitivity, but I don't know if the improvements are significant or at what speed they can be brought on. I am definitely not knocking down low carb as an efficient way to control type II diabetes. I am not a diabetic, but I know from my own experience that a low carb diet gives quick and significant results in lowering blood sugar levels. Its just that it does it by avoiding the problem and not really solving it. Then again, if there isn't a good way to solve the problem, avoiding it is not a bad alternative. In the end, I think your suggestion to both eat low carb and strength train is excellent as it's a way to avoid the problem while working on solving it. Beats taking pills, that's for sure.

As to making temporary improvements vs. permanent ones, you've got a point there.