The Shake Weight: A Good Workout?

It was suggested to me at a barbecue over the weekend that I write a blog on The Shake Weight...so here we are. 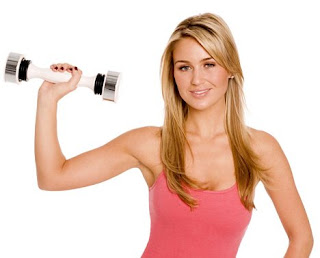 So, as you see above, the resistance glides back and forth, requiring frequent contraction of opposing muscles to keep the movement going.  Its recommended use is six minutes per day, every day.  At first, I thought the product was created so infomercials about it could be made for the entertainment of teenage boys, but The Shake Weight has actually been a huge hit, achieving over $40 million in sales!  The question is: How useful is The Shake Weight as a workout method?


The Shake Weight: A Scientific Breakdown
As you read this assessment, keep in mind that I'm not concerned with whether or not it can make someone sweat, get out of breath, or get the heart racing.  I'm concerned with characteristics of exercise that produce actual long-term improvement:


While the commercials are certainly entertaining and the simplicity of using one product and one single exercise sound appealing, The Shake Weight has major flaws in the absence of negative resistance, a minimal range of motion, a lack of intensity, and the absence of a workout for most of the major muscle groups.  Also, when terms like "tone" and "sculpt" are used, they are speaking about fat loss as much as muscle development, and fat loss is mainly due to improvements in the diet (specifically, removing foods from your diet).  Infomercials rarely display effective workout products, and The Shake Weight is no exception.
Posted by Dr. Sean Preuss at 10:14 AM

I rarely watch TV and didn't get to see this wonder of modern exercise science until now. So ridiculous it's funny. But people will buy anything, just as long as it promises to save them from the old fashioned hard work.

You have been missing out! The Shake Weight is a fantastic source of comedy for the US and Canada:

Seriously though, it is ridiculous. It's a perfect way to take advantage of the many people here who only care about how a few parts of their body looks (abs, arms, etc.).

Don't know what's up with people only concentrating on specific body parts. A lot of men in my gym have big arms, shoulders and back but tiny legs and all I ever see them do are upper body workouts. I don't get it.

It's sad to hear that the approach of working out only some areas is not just a North American thing. Many men in mainstream gyms here also do the upper body workouts only. I have had a fair amount of clients, male and female, who have no interest in the total picture, just nice-looking abs, arms, or thighs. I don't get it as well. Fortunately I get the chance to educate them on the importance of a total body workout.