The Road Trip Diet...Plus Observations from an Expanding Country

After 13 states and 2,500 miles of driving in five days, my friends (Andrew and Marc) and I made it to Arizona. 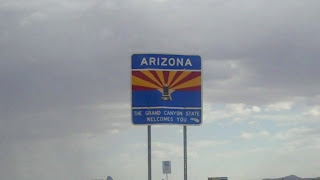 This was my third cross-country drive.  I have to say, the US has a really diverse set of biomes and cities which have made each drive exciting and different from the rest.  Here are a few more photos from last week's trip: 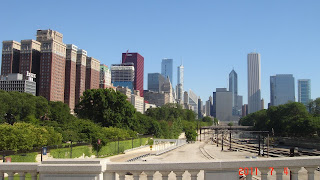 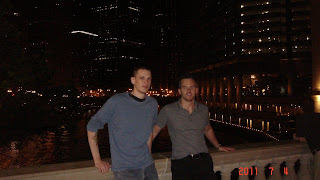 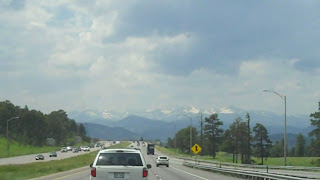 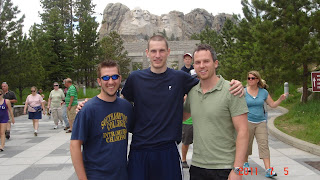 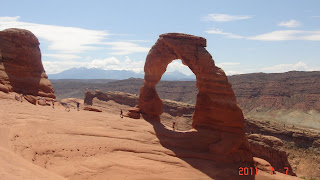 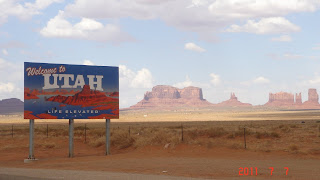 Despite the long driving days and lack of healthy restaurants in many small US towns, I didn't struggle to keep up my healthy lifestyle.  In fact, after five long days of driving, I lost 2.2 pounds (some of that is probably muscle, but that can be regained quickly after returning to normal training habits).  For those of you who don't want to jeopardize your current physique and health for a long road trip vacation, here's what I recommend:


Small Towns, Young People...Big Problems
Two concerning observations from the trip:
One of the two hikes we took was at Mount Rushmore National Park.  However, I wouldn't really call it a hike...we were walking along a boardwalk with no steep climbs and it took less than an hour (despite all the standing around that we did while taking pictures).  The picture below shows part of the walkway. 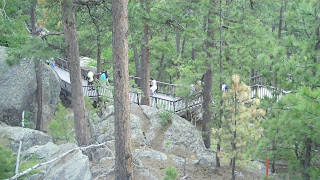 We were walking along at one point when we someone say, "I can feel my heart racing."  I turned around to see that it was a girl, roughly 15-20 years old.  She was extremely obese and out of breath.

According to a recent WebMD report, that young girl is a microcosm of a bigger US problem.  38 states feature obesity rates over 25%.  Childhood obesity has "tripled or quadrupled since the 1970's," according to James Marks, senior vice president of the Robert Wood Johnson Foundation.

This doesn't surprise me, due to my second observation on the trip: small towns are littered with horrible food options.  Almost every small town we visited across those 13 states featured some combination of fast food restaurants along the main street.  This is probably built to attract travelers like my friends and I who are looking for something familiar, but that doesn't prevent locals from frequenting such places.  It's not surprising that most of these towns seem to have high obesity rates, judging from the population sample size that we witnessed.

Marks, like any other public health official would, blames the portion sizes along with physical inactivity (clearly physical activity is key...I mean, isn't that what helped me lose two pounds over five days in which I spent over 50 hours sitting in a car?).  We need to minimize the role of grains, sugar, and refined carbohydrates from our diet while filling up on nutritious foods that don't have long ingredient labels, such as like fish, meat, eggs, and vegetables.

Changes clearly need to be made in how this country eats.  That starts with giving people the right information.
Posted by Dr. Sean Preuss at 1:14 PM

What a great way to turn moving to a different state into a fun trip with your friends. Very nice photos. What city is it in the second one?

Don't know if you will agree, but to your list of recommendations I'd add that intermittant fasting would fit into that sort of trip well.

Hey, within five days you went on two hikes and exercised in a gym. Many people are not that active in an average week, plus they sit in front of a computer or TV for hours uppon hours every day. Sure, physical activity is not the key, but it is a key. I think it all matters - food choices and quality, portion sizes, physical activity, and most of all the way we think about health and the overall quality of our lives.

Thank you. It was a great experience. Chicago is the city in both the daytime skyline photo and the photo after it with my friend and I in front of the river.

You're absolutely right with IF. I actually used IF on the trip for time and cost efficiency, but did not put that on "The Road Trip Diet" for some reason.

In my opinion, I think my one challenging hike, the walk at Mount Rushmore, and five minutes of strength training may have been enough physical activity to catch me up, in terms of calorie expenditure, to the average working person's weekly physical activity. During the road trip, we were completely sedentary for 10-12 hours/day. The standard working person walks around the office, to the water cooler, moves around at lunch, may climb some steps to and from the office, etc.. Anyway, if weight loss were a simple calorie accounting question and physical activity is pivotal as Marks believes, then I would have needed to burn/underconsume a total around 7,000 calories in those five days.

Thanks for the details on the photos, Sean. I was looking at Andrew and you, didn't even notice the river in the background of that second Chicago photo.

It's my opinion that calories are not the whole story, but that they do matter. Besides, exercise and physical activity are not just about burning calories, the benefits extend way beyond that both physically and mentally. Of course, one can not out-exercise a bad diet, but I still think they play an important role in weight loss.

As for your loss over the five days, it could have been just a result of a slight dehydration, or there was slightly less food hanging around your digestive system or it wasn't true weight loss at all - just a scale number fluctuation caused by weighing in different places and possibly on different scales. Altogether, I don't think your five day travel experience can be used to draw general conclusions about the influence of exercise and physical activity on weight loss.

It is a dark photo, but I'll just take that to mean that Andrew and I are so handsome that it's hard to notice other aspects of the photo...so thank you.

I agree with you in that calories aren't the whole story but do matter, that one cannot out-exercise a bad diet, and that my weight loss isn't necessarily all fat (which is why I said "AROUND 7,000 calories").

It's clearly not a perfect scientific observation, but my point was just to say that if weight loss was only an issue of calories in vs. out, I should have at least stayed the same if not gained weight with my minimal physical activity (just so you know, my weight has even dropped a little bit more from the post road trip number instead of going back up, my body fat % is a little lower from the last NY reading, and I drank loads of water and ate a lot of salt over the trip).

Physical activity clearly has physiological and psychological benefit, and having more muscle mass increases potential for glucose storage and metabolic rate, so I'm certainly not saying that we don't need physical activity.