For type II diabetics who crave carbohydrates, there seems to be a natural "medicine" to help dull post-meal blood sugar spikes: vinegar.  One study found that 20 grams (four teaspoons) of apple cider vinegar significantly improved blood glucose and insulin sensitivity in diabetics and insulin resistant individuals following a high carbohydrate meal [1].  You can see the results charted below (the controls were non-diabetic and insulin sensitive): 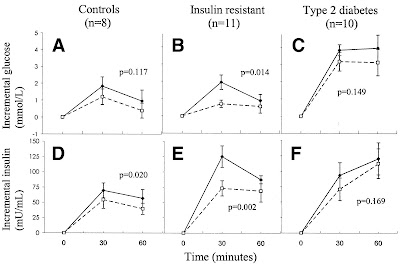 The dotted lines show those who took vinegar before meals.
Another study found that when ingested before bed, vinegar reduces waking blood glucose levels in type II diabetics [2].  The authors believe this is due to the effects of acetic acid, the active ingredient in vinegar. Acetic acid suppresses the enzyme that helps breakdown some complex carbohydrates into glucose, which could decrease the storage of glucose (glycogen) and therefore keep insulin sensitivity higher [1].

I strongly urge diabetics to avoid carbohydrate-dense foods in general.  However, consuming vinegar before a high carb meal seems to blunt the harmful effects for diabetics, at least in the short term.
Posted by Dr. Sean Preuss at 11:44 PM

Not so sure how a "shot" of apple cider vinegar would taste! FYI, Hgb A1C is the average blood glucose over 3 months, not the waking blood glucose.

A study published in 2010 also showed that mealtime vinegar reduced post-meal glucose spikes in type 2 diabetics. Study was done at Arizona State University. I blogged about it here:

Hey Melissa - Agreed on the shot of ACV! Thanks for catching the error.

Steve - The study you're referencing is the same study that I linked to in [1]. However, you are a few steps ahead of me in blogging about it. Thanks for sharing.

It would be easy to add apple cider vinegar to a meal. Mix it into a salad and voilà! Adding it to some sort of a soup could also work. Before bed - perhaps dilute it with a glass of water.