Back from a three-week hiatus!  Thanks for your patience.  My schedule has been demanding over the past few weeks, but you'll definite hear from me more often this summer. 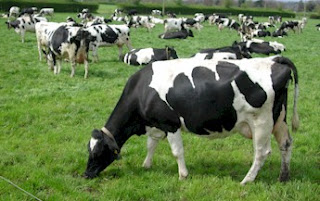 Anyway, I recently heard about this story, reported by talented Arizona Republic writer Cathy Creno, about a fugitive cow in Ahwatukee, AZ during the summer of 2010.  Apparently the cow escaped from a farm in June and was able to allude potential corrallers until August.  During her independence, the cow walked around neighborhood streets, lounged under trees, drank water from a small stream in south Phoenix, and ate grass in the neighborhoods near the local mountain preserve.

Not surprisingly, the fugitive cow survived on grass, her natural source of food.  However, the majority of red meat consumed in the US comes from cows raised on grains, soybeans, and corn.  Does it make a difference in the quality of our meat, and if so, how significant is the difference?  I'm going to break it down in segments of the differences found through research.

All fat is made up of fatty acids, much like protein is made up of amino acids.  Fatty acids vary in composition and effect on the body.  Palmitic acid, which is found less in grass-fed meat, is known to increase blood cholesterol [1].  On the other hand, stearic acid has no effect on blood cholesterol levels.  Therefore, grass-fed red meat is a better choice for people trying to limit their total fat or who are worried about increasing cholesterol.

If you take a fish oil pill, then you are trying to improve your omega-6 to omega-3 ratio.  As I have said before, omega-6 fatty acids aren't inherently bad and omega-3s aren't inherently good [3].  The problem is that people generally eat so many omega-6s and so few omega-3s that the ratio is poor and leads to blood clots and a higher risk of heart disease and some cancers [4].  Also, low omega-3 intake is linked to high rates of depression and suicide.  Grass-fed meat offers an average ratio of 1.5:1, whereas grain-fed meat features a ratio over 7.5:1 [1]! 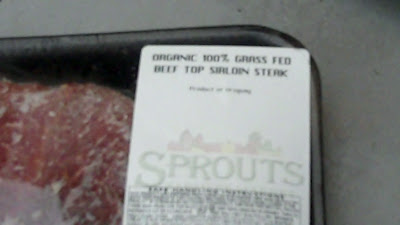 In addition to less total fat, healthier saturated fatty acids, a much better omega-6: omega-3 ratio, more trans vaccenic acid, and more CLA, grass-fed red meat has over four times more vitamin A and at least double the vitamin E of that found in grain-fed meat [1].  Also, fat from grass-fed meat is more resistant to oxidizing, meaning the fat has a higher resistance to becoming toxic and dangerous to cardiovascular health [4]. 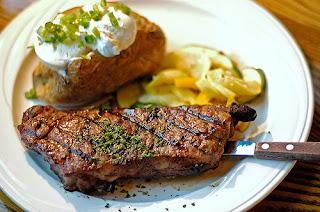 There are clearly a number of benefits to eating grass-fed meat.  So the question is, why wouldn't you purchase it?  I can come up with three reasons: more expensive, harder to find, and taste.  In regards to price, ground grass-fed meat is much more affordable than buying steaks and is around $6/pound in Arizona.  A few national and regional chains carry grass-fed meat, including Whole Foods, Sprouts, Trader Joe's, Fairway, and Fresh and Easy.  Regardless of where you are, you can order from U.S. Wellness Meats and have it sent to you.

As far as taste goes, some have said that grass-fed meat has a hint yellow to it, perhaps making it slightly less appetizing.  The yellowish color is due to the higher content of vitamin E [1].  Also, a few have said that it is a little tougher to chew.  Buying ground meat is an obvious and easy way to circumvent this problem.

For those of who you haven't tried grass-fed meat, I recommend giving it at least one shot.  Buy a steak or a pound of ground meat and prepare it as you would with any red meat.  If you care about your health and diet, then grass-fed meat is a far superior option.  For those of you who have tried it, feel free to leave a comment with your own experiences.
Posted by Dr. Sean Preuss at 4:14 PM

My very first blog post ever had to do with using a rice cooker as a sous vide device to get really tender grass-fed ribeyes:

Thanks. The sous vide is a good call. I used your suggestion in a recent presentation that I made for those who are interested in grass-fed.

Great post Sean. Q: Are you sure the differences in O3/6 are that high?

Thank you. That study from the omega-6:3 reference for grain-fed red meat is a review of seven studies, so it's not just a fluke from one study's data. If those ratios are correct, it suggests that grass-fed meat is anti-inflammatory while grain-fed is pro-inflammatory.