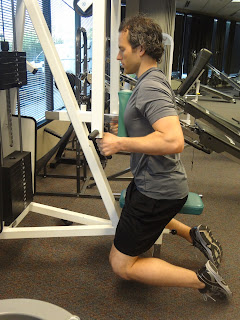 Muscle burns calories. If I build muscle, then I will become a calorie-burning machine and the pounds will come off.


That was the sentiment expressed to me by a new client yesterday. Unfortunately, it's simply not true. I had to rain on his parade.

Building muscle is an extremely inefficient way to increase your metabolism...but strength training is a different story. Confused? There's a reason to distinguish between the two.


The Metabolic Effects of a Single Strength Training Workout

Researchers looked at the metabolic effects of one strength training workout [2]. The researchers monitored the trainees at rest prior to and for seven days following two different workout routines. One routine was a full body workout featuring one set per exercise, with all sets performed till complete fatigue. The second routine featured the same amount of exercises and all sets were performed till fatigue, but each exercise was performed for three sets.

Before getting into the results, there’s one important feature to note about the study: it used a crossover design.  This means the same people were used for each trial, instead of using two different groups.  The men in the study performed one of the workouts, had a layoff in-between to allow for the initial workout to completely wear off, and then performed the other workout.  Having a crossover design increases the confidence that the results are actually from the workout and not from the basic differences of the people involved.

Enough about the study--what were the results? 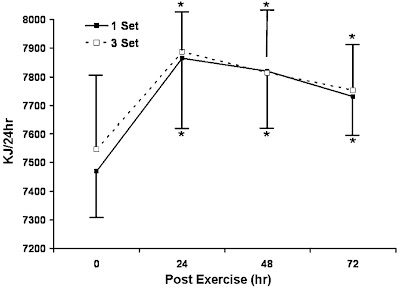 As seen in the graph above, strength training significantly boosted the subjects' daily energy expenditure for three days following each of the workouts. The graph expresses energy expenditure in kilojoules. In terms of calories, total daily metabolism increased by about 100, 90, and 80 calories per day for 24, 48, and 72 hours afterwards. Recovering from a strength training workout requires your body to expend a significant amount of energy.

The other finding worth noting was the lack of difference between the three-set and one-set routines. Daily energy expenditure increased to the same degree for each of the three days following, and the effects of both routines wore off on the fourth day. Even though one routine required 37 minutes while the other required only 16, the metabolism increase was the same.

My Interpretations of the Results

There are a few ways to put this information into useful contexts. First, don't rely on the mere addition of muscle to solve your weight problems. Adding muscle is part of a body reformation, but it shouldn't be the primary pillar. Dietary changes should be your focus if weight loss is a goal.

Second, increases of roughly 80-100 calories per day expended aren't very significant for people who are looking to lose weight, but that can be a major boost for people who aim to maintain weight. As previously discussed, The National Weight Control Registry (NWCR) is an organization that collects information from people who have lost at least 30 lbs. and have maintained that loss for a minimum of one year. Strength training is the second most popular physical activity (after walking) of  NWCR members [3].

Finally, as long as you strength train once every three days--even with a brief full body routine--you will maintain a constant state of elevated metabolism. While the muscle you add will not turn you into a "calorie-burning machine," a workout every third day will keep your metabolism elevated.
Posted by Dr. Sean Preuss at 10:35 AM

I really like the study you review. Do you have a link where I can find more info on it? And if not, do you mind if I reproduce the graph on my blog (I'll link back to this post).

If you leave me your email address, I'll send you the full study. Feel free to copy the graph.

Thanks for following H-A.

Chris Highcock introduced me to this training concept: high intensity, twice weekly, not requiring a lot of time. It works for me.