US Obesity is Increasing: True or False?

"Our country is getting fatter and fatter by the day."

I have heard the above comment many times. Is it true?


Obesity Rates in the US

The graph at the start of this article is based on data from several editions of the National Health and Nutrition Examination Study (NHANES), which is conducted over several years about once per decade. As you see, there is a sharp rise in obesity and extreme obesity--according to body mass index--from the late 1970s to 1999/2000. After 2000, there's a plateau, small increase, and then a small decrease. So are we getting fatter as a nation?

NO...but I'll get back to that later.

Commentary on the change in US obesity is generally based on one of two sets of data: NHANES or Center for Disease Control and Protection (CDC). When you hear projections saying more than half of the US will be obese by 2050, people are using CDC data [1].

However, the CDC data is likely wrong. NHANES data shows 33.8% of Americans are obese and that has not changed in a decade [2]. The obesity rate in women has not changed since 1999 and in men since 2003. Technically, as you see in the graph at the top of this article, the rate has featured small fluctuations. But these fluctuations are not statistically significant, meaning we cannot confidently say that the small fluctuations did occur. 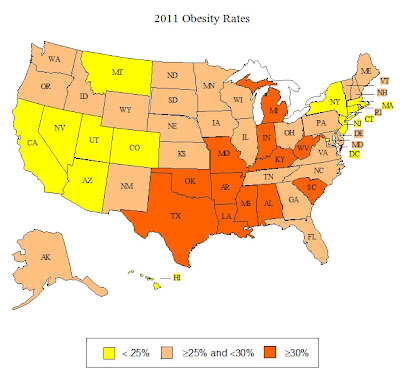 I use the NHANES data over CDC data in determining obesity rate change due to one factor: the objectivity. In the NHANES studies, researchers conducted the measurements themselves. In the CDC data, the study participants measured and reported the data to the researchers.

The subjectivity of CDC data leads to misreporting. People may misreport due to estimating instead of actually measuring, lie because they are uncomfortable with their weight, overstate their height (which leads to incorrect body mass index calculations), etc. In exercise studies, it's well-known amongst researchers that people generally overestimate the amount of physical activity that they participate in. In general, we are not perfect when it comes to estimating.

Thanks, Steve. I hope you are doing well.