Will I keep the weight off? Will I be happier? Will my lifestyle change? 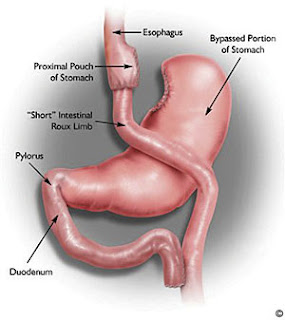 For people who want to lose large amounts of weight, these are questions that might be asked before choosing to go the surgery or behavior change route.

Bariatric surgery is an extremely common weight loss method that comes in two common forms. Roux-en-y (pictured above) is a procedure that leads to an-egg sized pouch of the stomach being used, while the rest of the stomach is detached from the digestive process. Consumed food goes from the esophagus to the small stomach pouch, which leads directly into the small intestine. The adjustable gastric band (pictured below) in a silicone strap that is placed around an upper portion of the stomach. Both procedures make the stomach (or a portion of the stomach) smaller so less food can be consumed and satiety is attained quicker. 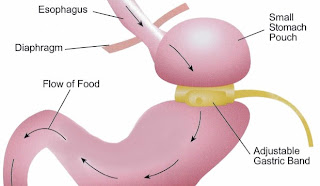 The National Weight Control Registry (NWCR) is an ongoing longitudinal study of people who have lost at least 30 lbs. and have maintained that loss for a minimum of one year. To examine the long term differences between the bariatric surgery and lifestyle change approaches, researchers studied 315 people from the NWCR who were at least 5.5 years past the end of their major weight loss period [1]. The participants averaged a weight loss of 123 lbs. and have maintained at least 30 lbs. of that weight loss for 5.5 years prior to the start of the study. The participants averaged a peak pre-weight loss weight of 298 lbs.

Here are the major results attained from a year of observation:

I think an obvious contributor is the natural cognitive stimulant that is exercise. If the bariatric participants increased their physical activity and high intensity exercise, it's safe to assume that depression symptoms would improve. In addition, bariatric patients demonstrated poorer eating habits, which could also contribute to depression. 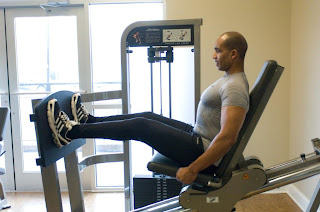 The bariatric and lifestyle groups ate similar numbers of calories, but the difference is that the bariatric patients need to consume less while the lifestyle group chooses to. Also, people who choose the bariatric route are only required to change the amount they consume. Their physical activity, high intensity exercise, choice of foods, and total sedentary time do not have to change. These habits are strongly linked with the amount of future weight gain [3], so longer studies could demonstrate that bariatric patients struggle more with weight maintenance.

Overall, I support the lifestyle route because it will provide the associated health benefits, body shape improvement (with the addition of muscle), and likely save thousands of dollars. For those who choose bariatric surgery, consider adding other lifestyle changes if improving stress and depression are desired.
Posted by Dr. Sean Preuss at 4:17 PM