Traveling the Route of Happiness 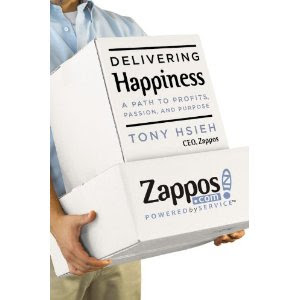 I recently read Delivering Happiness, the fascinating story of Tony Hsieh (pronounced "Shay") and how his company, Zappos, became the billion dollar-per-year business it is now.  At 24 years old, Tony and a close friend sold their company, LinkExchange, for $265 million.  Feeling unfulfilled after, Tony then started Zappos, nearly lost all of his money in his efforts to bring it to success, but eventually helped the company rise to what it is now.  Along the way, he achieved what I truly found to be amazing: A way to make all of his employees and their partnering companies even more passionate about what they are a part of.  By doing so, he delivered a new level of happiness to their lives (for more information about Tony's story, go to http://www.deliveringhappinessbook.com/).

While happiness is a different component of health than those usually discussed on Health-Actualization, I want to discuss it today because happiness is the most important currency there is.  The objective of every action in our lives should be happiness.  With that in mind, here are some of the key points from Tony's breakdown of happiness in his book:


The Four Parts to Happiness
Three Types of Achieved Happiness
Finally, I'd like to leave you with some small tips I have found to increase the level of happiness in my own life.  Some of these may be proven to work, while others could just be related to me.  Enjoy: