One of the most commonly examined risk factors for heart disease is having "high cholesterol."  Specifically, health professionals focus on the total of low density lipoprotein particles, which are also called LDLs or "bad cholesterol."  However, as discussed here previously [1, 2], looking at the total number of LDL particles is a very flawed way to determine risk for heart disease - LDL particles aren't all built the same way. 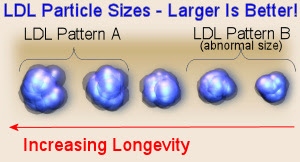 LDLs come in different sizes and densities.  LDLs that are smaller and more dense are more likely to be atherogenic.  However, when larger and buoyant, LDLs don't carry the same connotation with high cardiovascular disease risk.

Now, if you have been tested through a vertical auto profile or NMR lipoprofile [1] and found out that your LDL particles are smaller and more dense, you're not completely out of luck - you can change your particle size through exercise.

A large study called the STRRIDE trial looked at the effects of different intensities and volumes of exercise on LDL particle size in sedentary, overweight men and women over eight months [3].  Group A performed 176 minutes of low intensity exercise (walking) per week.  Group B performed 117 minutes per week at a moderate to high intensity (jogging, cycling, or using an elliptical machine).  Group C exercised about the same amount of weekly time as group A, but at the same intensity as group B.

As one would likely guess, group C showed the biggest improvement in changing LDLs from small and dense to large and buoyant.  However, a more telling sign was that group B had a stronger effect than group A, despite exercising an hour less per week.  In other words, intensity is more important for improving LDL particle size than volume of exercise. 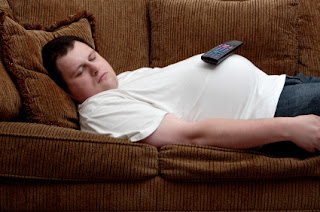 A follow-up of the subjects in this study showed some discouraging and encouraging effects on the particle size changes [4].  The discouraging news was that five days of inactivity following the study almost completely attenuated the particle size benefits from the trial.  However, before you start labeling exercise as futile, consider this: while five days of rest basically brought the exercise groups back to baseline LDL particle sizes, they were still much better off than the sedentary control group, who experienced significant digressions in particle size during the course of this study (perhaps the guy in the picture above was in the control group).

Obviously a lot of what I discuss on this blog relates to strength training (ST) as a means to improving health, but I have not read or found any research looking at its affect on LDL particle size.  Therefore, I can't say that ST does or doesn't help and how to manipulate it to get the best results in this area.  Going on the research discussed above, here are my recommendations:

On a Personal Note...

Thanks to all H-A followers for your patience over the past two months.  I recently saw a significant spike in personal training clientele and am working that in with my usual reading and a study that I am putting together at Arizona State University.  Health-Actualization will have some ebbs and flows with my work load, but it certainly isn't going away any time soon.
Posted by Dr. Sean Preuss at 4:47 PM