Last week, I was helping a friend with his sink's poor drainage.  Every time it was used, water would backup, filling the sink.  His sink drained...but at an extremely slow rate. 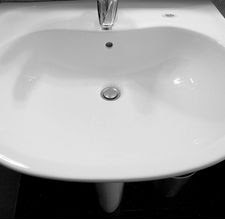 The problem?  The drain pipe was clogged.  After taking off the trap (the 'U'-shaped portion of the white tube in the picture below), we discovered clumps of hair, food, and tweezers in the drain pipe (in defense of my friend, he recently purchased the house). 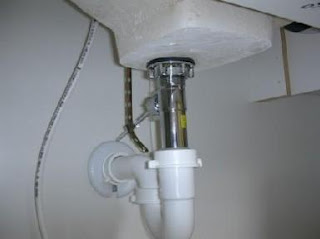 Fortunately, we were able to remove all of those items, put the trap back on, and restore normal drainage.  However, wouldn't it be easier if the drain pipe could merely expand itself every time water was in the sink?  In addition, imagine that the pipe could expand to greater widths when water was coming down faster or in greater amounts - taking off the trap to remove clumps of hair would never be necessary!

That's how your arteries work: when blood flow increases, arteries expand.  When flow is faster or in greater volumes, the arteries expand even more.  This ability to expand with increased blood flow is called flow-mediated dilation (FMD).  Simply put, FMD is how much an artery can expand beyond it's usual size.  It's typically measured by cutting off blood flow at the upper forearm for five minutes.  A measure of 7% or greater is considered healthy.


The Importance of FMD

A poor FMD is a good predictor of atherosclerosis [1].  Researchers learned this by studying the FMD of arteries of people with no blockage versus individuals with mild atherosclerosis.  The blockage-free group experienced a stellar dilation of 13.2%, whereas the atherosclerosis group only reached 1.8%.  In other words, the clear arteries could expand greatly to meet varying amounts of blood flow, but the partially blocked arteries couldn't even expand 2% above their usual size.  A different study found that when FMD decreases, it predicts increased thickness of the artery walls (a sign of increased risk for heart disease/heart attack)  [2]. 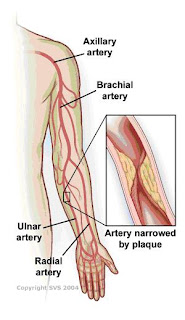 However, FMD doesn't just predict heart disease risk - it plays a key role.  The authors of the first study stated that if partially blocked portions of the arteries could expand, "substantial reductions in (arterial) resistance could occur [1]."  Less arterial resistance translates to less arterial stress and a lower risk for heart disease/heart attack.

This takes us back to the sink conversation: if your drain pipe could expand, the resistance to the water passing through would decrease and water would get to its desired destination in a reasonable amount of time.  The difference between your drain pipes and arteries is in the end result: when water doesn't get through the drain pipe, it sits in your sink.  When blood does not pass through a blockage in your arteries, tissues become oxygen-starved and die...and the person may die with it.

Why Do I Need to Know This?

Flow-mediated dilation is a measure that predicts and plays a role in heart disease and heart attack risk.  It's a good representation of cardiovascular health.  ﻿Typically my posts talk about a way to improve health or fitness.  However, this post is merely a discussion on a way to measure health.  In some of my upcoming posts, I'm going to discuss ways that exercise and diet affect FMD, and therefore, how they affect cardiovascular health.  Stay tuned.
Posted by Dr. Sean Preuss at 3:28 PM