I discussed research and my thoughts on intermittent fasting, such as The Fast Diet, two weeks ago. In the post, I pointed out two alternate-day fasting (ADF) studies resulted in weight loss for the fasting participants. The studies covered populations that ranged from a "healthy" weight to obese. While ADF features three to four fasted or semi-fasted days, The Fast Diet requires only two semi-fasted days per week (their semi-fast days consist of 500-600 calories consumed).

The line graph shows the percent of body weight loss during each day of a 22-day ADF study with healthy to overweight individuals. The bar graph shows the amount of fat and fat free weight, in kilograms, at the start and end of the study. The participants lost 3 lbs, with 1.8 being fat tissue.

How can The Fast Diet and other intermittent fasting programs provide weight loss? Here are two explanations: 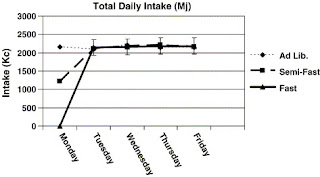 In a nutshell, fasting or semi-starvation for one day each week likely won't trigger a full compensation over the rest of the week. With The Fast Diet, followers are experiencing two semi-starvation days per week. Unless they are taking extreme measures on other days (i.e. eating dessert or going out for dinner on all non-fasting days), it's very unlikely that followers will atone for the lack of food consumed on the fasting days. Also, long food droughts lead to lower levels of circulating insulin, allowing the body to enter a state favorable for fat breakdown.

These are not all of the underlying reasons, but just two ways to explain why intermittent fasting routines, such as The Fast Diet, are often successful in producing weight loss.
Posted by Dr. Sean Preuss at 4:39 PM