How to Raise a Superstar Athlete, Part I 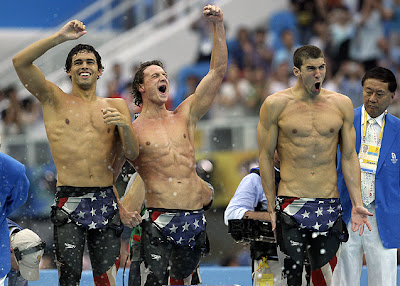 I believe there are two major factors to becoming a successful college and/or professional athlete: genetics and skill development.  However, no amount of genetic gifts or skill development may get a person to elite athlete status if the person isn't playing the right position and the right sport.  Lets discuss.


Part I: Genetics
You might look at the picture of the Olympic swimmers at the top of this article and think that these athletes developed their similar physiques because of swimming.  However, the cause and effect are actually reversed: because of these leaner, longer (ectomorphic) physiques, Michael Phelps and friends found swimming to be their sport of choice.  The long arms give them to ability to take big swim strokes while their leanness allows for the minimal weight possible to be carried through the pool.  This advantageous physique is most obvious at high levels of competition (like the Olympics), where only the most elite athletes can hang.  For other examples, take a look below at the bodies of the 2011 Boston Marathon leaders or the 2002 World's Strongest Man finalists: 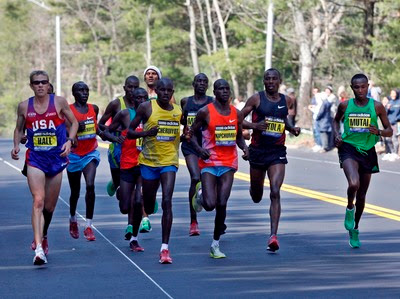 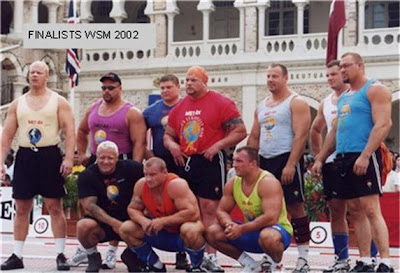 The marathon runners benefit from having a very low body mass (with little muscle and fat) to drag around for 26.2 miles.  The power lifters benefit from having very high amounts of muscle mass with some thickness to their frames.  The strength is necessary for obvious reasons, but the added thickness helps in generating momentum to perform the lifts.
As it concerns your child and genetics, simple observations will help you determine what direction is best. Try signing your kid up for many sports when he or she is young.  Watch how his or her physique develops.  Examine how your child fares in different activities.  Specifically, pay attention to how your child compares to other kids of the same gender and age in regards to these traits:
If your boy is heavier, stronger, and taller than most of the kids, he may be best suited to play offensive or defensive line in football.  If your girl is shorter, faster, and has above average muscularity, she could be a good prospect for attack or defense in soccer, or as a second baseman or center fielder in softball.  A taller, leaner, somewhat muscular child that does well in sprinting or jumping should consider basketball, playing wide receiver in football, or goalie in soccer.

If you are unsure where your child's features would fit best, try watching professional or major college sports.  The prototypes for these sports and the positions in them are pretty consistent.  For example, if you were to watch a few baseball games, you might notice that first basemen are generally very tall, stronger, sometimes thicker, and left handed.  Center fielders, on the other hand, are usually smaller, leaner, and faster, but they don't possess the power of first basemen.

Now that you know what you are looking for in assessing your child's best sport and position, stay tuned for the next post, which covers the second and final part of this discussion: how to acquire the skill proficiency necessary to be a sports star.
Posted by Dr. Sean Preuss at 7:21 PM