The Story of Fat Cells

Over 75% of obese kids go on to become obese adults [1]...why?  What determines your greatest potential leanness?  Why can't some obese people lose much weight on interventions using generally-effective diets?

All of these questions can largely be answered by fat cells: specifically, fat cell quantity and size.  Allow me to explain.


Growth and Reproduction of Fat Cells

From one to about 18 years old, we body gain fat mainly through the increase in the number of fat cells [2].  Losing fat during those years comes through the decrease in fat cell size.  During adulthood, we basically become thinner and fatter through the change in our fat cell size [1] (we can increase fat cell quantity during adulthood, but that only seems to occur in one specific scenario which I'll get to later).  Considering what you just read, you may ask yourself: if we gain fat cells during childhood and adolescents, and if we increase and decrease fat cell size after that, then when do we lose fat by getting rid of fat cells?  The answer is that we don't: fat cells, once added, are part of a marriage to our body where divorce isn't an option (at least through natural methods).

A study measuring the growth of fat cell size and number from four months to 19 years old in 288 subjects, both male and female, produced the data charted below [2].

The dark line is for lean individuals and the dotted line is for obese people.  The chart on the left shows changes in fat cell volume over those 18-plus years.  As you can see, after year one, it barely climbs until 18, when it increases more significantly in the obese subjects.  On the right side is the chart for fat cell quantity.  Both groups gain quite a bit, but the obese people are way ahead and increase at a much greater rate.

The fat cells we acquire until age 18 basically determines the leanest that we can possibly become as adults.  As mentioned, we can decrease our fat cell size, but only to a certain extent.  There seems to be a range that fat cells can shrink to, which is about 3-6 microns [no online link for the study: Fat Cells and Body Weight, Sjostrom].  Obese and lean people can all shrink into that size range, but the difference in fatness at that point is determined by fat cell quantity. 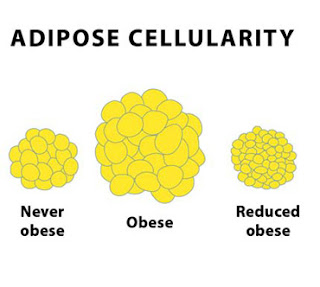 Fat cells also have maximum limits for growth, too.  This brings me to the exception mentioned before: the only time adults seem to increase the amount of fat cells that they have is during a state of extreme obesity [1].  The logical conclusion is that people in this state cannot expand their fat cells any further, so new ones are created to meet the demand for more fat storage.

Applying the Data to Our Lives

Here are my suggestions based on how I interpreted the studies discussed:
Posted by Dr. Sean Preuss at 3:21 PM